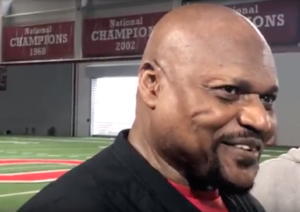 Ohio State’s defensive line lost two potential first-round picks from its 2018 unit, which saw game-changing linemen like Nick Bosa and Dre’Mont Jones depart for the NFL draft, but the Buckeyes have brought back another deep group to spring camp.

Ahead of Johnson’s sixth campaign in Columbus, how have his players prepared and what has he seen eight practices into spring camp?

On preparation with Mattison, who last coached Michigan’s defensive line from 2015-18…

“We have a great relationship. It’s all about — make sure we get the kids in a great position. He walked in the … first day and said, ‘Hey, let’s get our guys in great position to play football,’ and that’s what we are, so it’s really good.

“The fact that he’s really experienced. Knows exactly what he wants, how to do it. Understand the front, understand the back end so we can get in great position. He’s not afraid to take suggestions. What’s the best fit for our guys? I think that’s kind of been our defense, how we’re going to put it together and I think Greg’s done good job reaching out and kind of managing it right now.”

On any scheme adjustments along the defensive line with Mattison involved…

“Right now, we have three guys working (at nose tackle). Davon has done a good job. He’s had a great, great spring thus far. We’ve got (fifth-year senior) Davon (Hamilton), (junior) Antwuan Jackson — and (sophomore) Tommy Togiai has done a great job. So I really feel good at the guys I have.

“I said the other day — (Hamilton, Jackson and Togiai are) probably the three best guys I’ve had in a long time. That I can interchange anybody, I’m going to get the same net worth, same kind of worth from each guy. But those guys have had a great spring so far.”