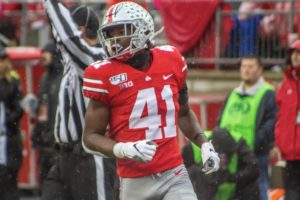 For the second straight game, Ohio State will be without center Harry Miller, as he is one of 10 players listed as unavailable for the Buckeyes against No. 11 Oregon.

That means that redshirt freshman Luke Wypler will again be at center for Ohio State, as he was in its 45-31 victory over Minnesota to start the season.

There are also three names listed as game-time decisions for the Buckeyes, two of which are big ones. One is safety Josh Proctor, who suffered an injury late against the Gophers, but has been a regular starter for Ohio State’s defense. The other is defensive tackle Jerron Cage, who missed the Minnesota game but was expected to be a key contributor for the Buckeyes this season.

Freshman defensive back Jantzen Dunn is also listed as a game-time decision. For both the game-time decisions and the unavailable players, Ohio State does not specify the reasons as to why the players have these labels.

Ohio State did not list cornerbacks Sevyn Banks and Cam Brown on the status report, meaning both should be available against the Ducks after missing Week 1. Banks, though, did not get listed last week either, and was left out as a precaution.

Also not listed, but available for the first time is linebacker Palaie Gaoteote, who was deemed eligible to play this season Friday after a reversal of the NCAA’s prior decision to not allow him to play due to prior transfer rules.