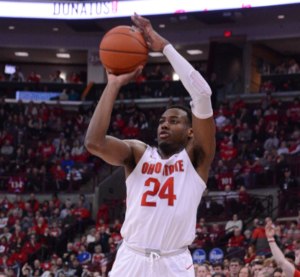 Carmen’s Crew will again have another team filled with former Ohio State players as competition, as was made clear when Big X, head coached by former Buckeye Andrew Dakich, would be adding guard C.J. Jackson and forward Andre Wesson to the team.

Carmen’s Crew, which won The Basketball Tournament last year with a core of Ohio State players that included William Buford, Aaron Craft, Jon Diebler, David Lighty and Evan Ravenel, defeated Big X as part off its run to the $2 million prize with an 89-75 victory.

Dakich, who was strcitly the coach last season for the team, will be stepping into a player role to join his former teammates in Jackson and Wesson.

Wesson finished off his senior season in 2019-20 with his best campaign to date, scoring 9.2 points per game and adding 3.9 rebounds per game while shooting 46.2 percent from the field and 42.2 percent from three. He was also one of the best on-ball defenders on the team.

TBT will be located on the Ohio State campus this time around at the Covelli Center, and is expected to host from July 23-26.