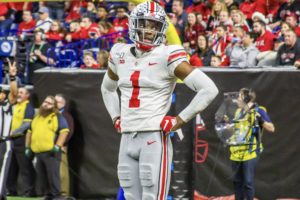 Three former Ohio State players went in the top three picks of the 2020 NFL Draft, and the last of those to be selected was cornerback Jeff Okudah, a consensus All-American and Jim Thorpe Award finalist who finished the 2019 season with 35 tackles (29 solo), as well as nine pass breakups and three interceptions.

Okudah was selected third by the Detroit Lions, who finished last season with a 3-12-1 record in the second year under head coach Matt Patricia, but he was not the only Ohio State player that the Lions ended up drafting. Detroit also selected offensive guard Jonah Jackson and defensive tackle Jashon Cornell in the third and seventh rounds.

Buckeye Sports Bulletin spoke to Chris Burke, who covers the Lions for The Athletic, on what Patricia may have seen from these Ohio State players. He said that, on the draft as a whole, it went about as expected for Detroit throughout all of its 10 picks.

“I don’t think there were any huge surprises,” Burke said. “I thought they hit a lot of needs. I mean, it seemed for months like Jeff Okudah was probably going to be the guy at three.

“I thought they addressed a lot of spots where they needed help and came out of it pretty well on paper.”

On Okudah specifically, there was not as much question as to which team would be selecting the star Ohio State corner, as many mock drafts predicted him landing with the Lions. What question did remain was if the Lions would attempt to trade down and take Okudah a spot or two lower, allowing a team with a need at quarterback to jump them.

Burke said he was a bit surprised that Detroit ended up not trading back considering the efforts that the team made to do so. Still, there was plenty of reason to be satisfied with Okudah at the third pick, and it was with a player that immediately fills a spot that the Lions were lacking.

“Those were discussions that they’d been having for months really like as far back as the combine, you know, they’ve been connecting with teams and just trying to figure out if there was any interest in anyone coming up,” Burke said. “I think the goal was to go back two or three spots and still take Okudah. I mean, I think he was the guy that they kind of locked on to, he fit a need. His style really matches up with what they want to do defensively.

“Matt Patricia has a really good relationship with the Ohio State program in general. So they are, I think they’re pretty confident that anyone they take from there they’ll have a good feel for both on and off the field.”

After Okudah and Georgia running back D’Andre Swift were selected, the Lions turned to the offensive line, taking Jackson with the 75th pick of the draft. They also followed that pick up with two more members of the o-line in Clemson linemen John Simon and Kentucky guard John Stenberg, both of which were selected in the fourth round.

Burke said that Jackson’s experience as a fifth-year senior, as well as his aggressive play style, contributed in him being taken by Detroit on day two of the draft.

“Jackson they liked a whole lot. And they’ve always been, at least as long as Bob Quinn and Matt Patricia have been together like the senior bowl’s always been a huge emphasis for them they like guys with experience they like guys that they can kind of spend some extra time with down there,” Burke said. “They want to be an in-the-trenches team that pops people in the mouth and is really aggressive and mean, and Jackson really seems like he fits that bill as a guy whose going to go in there and just try to push people around.”

Jackson will be joining another former Ohio State player on the offensive line in tackle Taylor Decker, who was selected 16th overall by the Lions back in the 2016 NFL Draft, and will now be in a contract year in 2020.

“I think they really like him. This is a big year for him because they you know, he’s playing on his fifth-year contract option,” Burke said. “I don’t think he’s an elite left tackle at this point in his career in the NFL, but he’s a guy that, when he’s healthy, you can throw out there and he can hold his own for a team that drops back quite a bit. So yeah, I mean, I think they’ve been happy with him. I think they like is they like his presence in the locker room too. So I don’t know, I wouldn’t be surprised if he gets a contract extension.”

Finally, with their last selection in the draft, the Lions rolled the dice and selected Cornell with the 235th pick. Cornell had 30 tackles, 6 1/2 tackles for loss, four sacks and a forced fumble in his fifth-year senior season, but was not projected by many to be taken within the draft.

Burke said that Patricia’s trust in the Ohio State coaching staff, as well as a desire to help with a lackluster pass rush, led to this seventh round selection.

“I think that when they get into those spots, either when they’re signing guys or when they’re making those late round picks, like they almost defer back to programs that they’re comfortable with and coaches that they know really well,” Burke said. “He is another guy that kind of fits a need, if he can give them something on passing downs because, I mean they were awful last year getting a pass rush and a couple of guys they were counting on couldn’t stay healthy.

“If he can step in and do some of that I think, you know you’re pick 235 round seven, you know you’re going to have to fight a little bit of a battle to make the roster, but I think he’s got a shot to be there.”