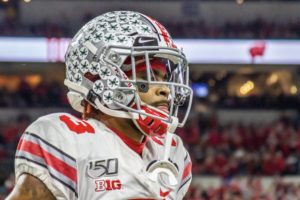 Heading into the 2020 season, Ohio State will have 63 former players on 27 different NFL rosters, including four with the Las Vegas Raiders. That includes cornerback Damon Arnette, who was the 19th-overall pick in April’s draft.

Most evaluators gave Arnette a second- or third-round grade, but the Raiders ignored those projections to address a significant hole in the secondary.

“I thought, draft night, that was a huge reach,” Vic Tafur, who covers the Raiders for The Athletic, told Buckeye Sports Bulletin. “But one thing I was told after made sense: After the first two cornerbacks in the draft, teams had a very different list of the next six guys. They really liked him in the interviews, had a lot ties to the Ohio State staff and didn’t have a second-round pick.

“I will say they were taking a corner no matter what at 19, so there was definitely an element of need.”

The Raiders finished dead last in the league last season in a variety of defensive statistics, including yards per attempt (10.4), receptions of at least 20 yards (37) and touchdown passes allowed (23) against perimeter receivers. By comparison, Arnette allowed just three touchdowns in coverage over 38 collegiate starts. But even if you ignore the statistical improvement, Arnette’s style of play fits right into the aura and mystique of the franchise.

“(It) sounds like he and (second-year safety) Johnathan Abram are twins,” Tafur said. “The Raiders want a nasty edge in their secondary like they had in their glory days.”

"I think he's an old-school bump and run Raider cornerback."

Coach Gruden compares @damon_arnette to some greats and what to expect from the young playmaker. pic.twitter.com/gpl8qz6R67

Arnette isn’t the first Ohio State defensive back to be taken in the first round by the Raiders, as he joins Jack Tatum in 1971, Neal Colzie in 1975 and Gareon Conley in 2017. Colzie and Tatum led the franchise to a win in Super Bowl XI, while Conley was traded to the Houston Texans after just three seasons.

So what went wrong for Conley, who was one of the final remaining pieces of the Raiders’ previous regime?

“Both of the coaching staffs he had here were a little put off by Conley’s quiet, detached personality,” Tafur said, “While his lack of tackling fortitude was known, he was not the shutdown corner as advertised. He is pretty solid for the most part but seemed to give up one big pass play weekly.”

The new leadership, which includes general manager Mike Mayock and head coach Jon Gruden, has made it a point over the last two drafts to take players from elite programs that have made it to College Football Playoff, as evidenced by the recent selections of Arnette; Alabama running back Josh Jacobs and wide receiver Henry Ruggs; Clemson wide receiver Hunter Renfrow, guard John Simpson, defensive end Clelin Ferrell, linebacker Tanner Muse and cornerback Trayvon Mullen.

“I think (Mayock) definitely leans toward big, winning programs, especially this year when they pandemic seemed likely to wipe out offseason workouts and he wanted experienced, smart players who would better be able to handle the leap to the NFL,” Tafur said.

At the conclusion of the draft, Las Vegas signed former Ohio State long snapper Liam McCullough to a deal as an undrafted free agent. He’ll compete with incumbent starter Trent Sieg during training camp, and it’ll be an uphill battle to make the 53-man roster.

“Sieg was invisible last season, which is really good for a long snapper,” Tafur said. “I hear McCullough is really good, but he has his work cut out for him. No way they carry more than one (player at the position).”

Meanwhile, defensive tackle Johnathan Hankins is the longest-tenured Buckeye on the Raiders’ roster after joining the franchise in 2018. He recorded 50 total tackles, 1.5 sacks and one pass break up in 16 games last season, and is expected to be one of the leaders along a young defensive line this fall.

“They like him,” Tafur said. “He’s very good against the run, not bad against the pass and a quiet leader type.”

Former Ohio State running back Rod Smith, on the other hand, will be fighting for a spot in a stacked backfield that also includes the aforementioned Jacobs, Jalen Richard, Lynn Bowden and Devontae Booker. He was signed as a free agent last December and did not register a carry in three games.

“I think he and Booker are fighting for the fourth spot,” Tafur said. “It’s probably more even than people think, but there is no guarantee the Raiders will carry four true running backs, as fullback Alec Ingold can run and catch a little, too.”