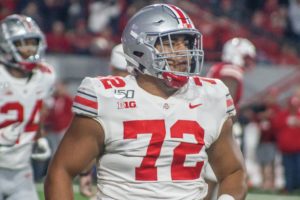 Ohio State jumped out to an early 14-0 lead and held on the rest of the way for a 38-25 victory over Penn State in Happy Valley.

The Buckeye Sports Bulletin staff distributed Buckeye Leaves to the deserving players who stood out against the Nittany Lions on Oct. 31.

The defensive line stepped up in a big way for Ohio State, and nobody stepped up more on the line than Tommy Togiai.

After a pretty modest opening game against Nebraska, Togiai exploded against the Nittany Lions, recording a team-high seven tackles, four tackles for loss and three sacks, the first three sacks of his Ohio State career.

And somehow, despite the crazy strong numbers, it does not tell the whole tale, with him and fellow interior lineman Haskell Garrett constantly finding their way into the Penn State backfield to mess with quarterback Sean Clifford.

This was a monstrous Halloween night for the D-line, and Togiai was the scariest of them all.

Justin Fields played his first game at Penn State, where he was once committed, and showed the Nittany Lions what they were missing. The standout junior signal caller earned a Buckeye leaf, completing 28 of 34 passes for 318 yards and four touchdowns in the Buckeyes’ 38-25 victory at Happy Valley.

Fields’ performance had tremendous stats to back it up, but his excellence went beyond the box score. The dual-threat quarterback dropped dime after dime to his receivers, beating solid coverage with outstanding throws all night long.

Garrett Wilson also deserves recognition for his playmaking and consistency, hauling in 11 catches for 111 yards after opening the game with a 62-yard rush on an end around. Wilson reeled in six first downs, with four coming on third down.

Master Teague also gave the Buckeyes a boost with his running ability, tallying 110 yards and one score on 23 carries, including a long burst of 31 yards.

Some wondered if Chris Olave would even play against Penn State after he suffered an apparent head injury in the season-opening win over Nebraska. But based on Ohio State’s offensive game plan, it was clear the staff was never worried about his status.

Olave snagged a 26-yard touchdown pass over cornerback Joey Porter to put the Buckeyes ahead 14-0 just over seven minutes into the game. And when the Nittany Lions opened the second half with a long touchdown drive to cut the lead to 21-13, he hauled in a 49-yard touchdown reception to halt the momentum.

Olave finished the game with seven catches for a game-high 120 yards and two scores, topping the 100-yard mark for the second straight game and continuing to try and put that Fiesta Bowl mistake behind him.

After a shaky start to the season in a 52-17 win over Nebraska on Oct. 24, the Ohio State defensive line responded in a massive way against Penn State and the captain Jonathon Cooper was among the best performers in the group.

Cooper was strong on the stat sheet against the Nittany Lions with five tackles and 1/2 a sack, but it felt as though he was in the backfield on every single play. His presence seemed to bother PSU quarterback Sean Clifford all night long.

The Nittany Lions were never able to establish a downfield passing attack because Clifford was consistently dealing with No. 0 in the backfield, as he beat right tackle Will Fries play after play to blow into the backfield. Some of his most impressive plays, like a bull rush that nearly knocked tight end Pat Freiermuth into Clifford in the third quarter, didn’t even show up in the final stats.

In a game where Ohio State knew it would need its leaders to step up, Cooper rose to the occasion and put forth what might have been his best performance as a Buckeye. He absolutely deserves a Buckeye leaf this week.