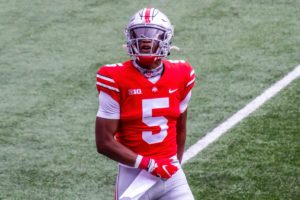 Despite falling behind 7-0 on the first drive in the season opener, Ohio State rallied back to defeat Nebraska 52-17.

The Buckeye Sports Bulletin staff distributed Buckeye Leaves to the deserving players who stood out against the Cornhuskers at Ohio Stadium on Oct. 24.

While Garrett Wilson was the lead receiver for Ohio State, Chris Olave was nearly just as impressive in the Buckeyes’ debut win over Nebraska.

Olave had six catches for 104 yards, including a long of 29 yards in the 52-17 win over the Cornhuskers. While Wilson dominated in the slot, Olave made plenty of crucial plays through the air to give Justin Fields another primary weapon to use in the pass game.

Olave left the game in the third quarter following a hard hit to the head by Quinton Newsome that led to a fumble, but his production prior to that play was more than enough to make a major impact on the offense.

Switching positions can be challenging for most athletes. Fortunately for Ohio State, Garrett Wilson is not like most athletes. In his first game at slot receiver, Wilson demonstrated how effective he can be at that position.

Wilson reeled in all seven of his targets for a career-high 129 yards and one touchdown, helping lead the Buckeyes to victory over the Cornhuskers.

The sophomore standout made one of the biggest plays of the game when he hauled in a 42-yard touchdown from Justin Fields to give Ohio State a 14-7 lead. Wilson also added a clutch 16-yard catch on a third-and-5 play from the Buckeyes’ 30-yard line on the first drive of the second half.

Nebraska had no answer for Wilson in the slot, and the dynamic ability he displayed against the Huskers bodes well for the Buckeyes moving forward.

Quarterback Justin Fields looked like he was in midseason form against the Cornhuskers, completing 20 of his 21 pass attempts for 276 yards and two touchdowns, with his only incompletion being on a 50-yard pass that Chris Olave could not hold onto in the end zone.

Fields also added a team-high 54 yards and another score on the ground, which was helpful because the Buckeyes could not get their run game going for much of the afternoon. His ability to run the read-option helped sustain drives and really put his all-around talents on display.

My Buckeye leaf goes to the most effective defender on the field for Ohio State against Nebraska, who also happens to be the most interesting story on the entire team. Just under two months removed from being hospitalized after being shot in the face as he was breaking up an altercation, senior defensive tackle Haskell Garrett was an unstoppable force in the middle of the Buckeye defense against the Cornhuskers.

He notched decent stats on the day, but his impact was felt outside of the stat sheet as well. He made it much tougher on the Nebraska rushing attack whenever he was on the field and provided some much-needed security for Ohio State at the defensive tackle spot, which entered the season with plenty of questions about depth.

The defense behind him had some issues, but Garrett looked ready to go, which is only made more impressive by the adversity he’s faced since September.