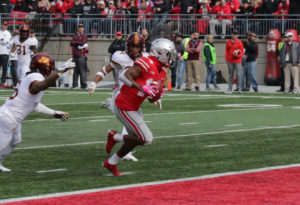 Third-ranked Ohio State improved to 7-0 on the season and 4-0 in Big Ten play after outlasting Minnesota, 30-14, on Saturday at Ohio Stadium.

There were issues for the Buckeyes, but another big day from Dwayne Haskins and the Ohio State passing attack masked them, leading to another comfortable win. After the game, the BSB staff handed out Buckeye Leaves for the top performers.

Here’s what they had to say:

I am giving my Buckeye Leaf to junior receiver K.J. Hill. The Little Rock, Ark., native made more big plays than anyone else in the game against Minnesota.

Hill hauled in a 42-yard catch on the Buckeyes’ opening drive to set up a Blake Haubeil field goal. He also came up with an impressive snag on fourth down to keep the chains moving in the second quarter. Later in the quarter, the junior wowed the home crowd with a spinning, one-handed grab that he took for a 36-yard touchdown. Later on, Hill helped put the Golden Gophers away with a 27-yard touchdown with 2:15 left in the fourth quarter to put the Buckeyes up 30-14.

He finished his superb outing with a career-high 187 yards on nine catches, including the two touchdowns.

It is hard not to give this to Haskins every week and he is certainly deserving again this week, but I am going with K.J. Hill who made multiple big catches against Minnesota in big spots to keep the offense moving.

While his one-handed stab on a 36-yard touchdown reception was the play that will deservedly get all the attention, it was a fourth-and-five catch early in the game that stuck out to me. It is catches like that that make Hill so valuable to this Ohio State offense, even with a significant receiver rotation. Hill is the most consistent receiver Ohio State has and he is making a name for himself on a national scale with his performance.

Where, oh where would this Ohio State team be without Dwayne Haskins? Maybe still undefeated, but probably not – and I mean no offense to Tate Martell. Haskins is just different; it’s as simple as that.

He was different once again against Minnesota, throwing for more than 400 yards (412 this time) for the second game in a row. Previously, Art Schlichster’s 458 against Florida State in 1981 was the only 400-yard passing game by an individual in program history. Haskins makes it look easy – he completed exactly 33 of 44 passes for the second game in a row, too, in addition to throwing for three touchdowns.

Without Haskins, the issues that this Ohio State team has would make it an average squad at best. With Haskins, the Buckeyes can still challenge for championships – but there’s a lot they’ll need to get fixed either way.

Dwayne Haskins dazzled with another 400-yard performance passing and K.J. Hill registered a career-best day with nearly 200 yards receiving, but Blake Haubeil should have his helmet covered in Buckeye Leaves after he stepped in seamlessly for Sean Nuernberger.

After the fifth-year senior placekicker dressed but was held out due to an unspecified “minor strain,” the sophomore kickoff specialist slid into critical situations and played a key role in Ohio State’s win over Minnesota. Haubeil split the uprights on three crucial field goals – a 21-yard chip shot in the first quarter, a 47-yard blast in the third quarter and a 27-yard dagger in the fourth quarter – pitching in nine of the Buckeyes’ 30 points at pivotal moments. Not bad for someone lining up as a placekicker for the first time since high school two years ago – and doing so before an announced crowd of 100,042.