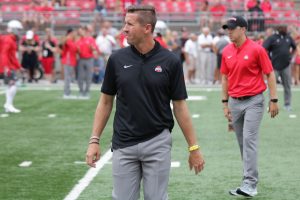 Ten years removed from his playing career at Ohio State, the former Buckeye and NFL veteran thought that once his playing days were over, that football would permanently move into his past.

Now, he is a position coach at Ohio State and loving every minute of it.

“It’s my dream job. I have no interest in ever leaving Ohio State,” he said Saturday at Rose Bowl media day. “I am looking forward to earning the right to be the wide receiver coach at Ohio State for the next 15-20 years.”

Hartline stepped in for the fired Zach Smith in an interim role just before the 2018 season and immediately found success. Four different receivers caught 30 or more passes as the Buckeyes had their most prolific passing season in program history, with a little help from quarterback Dwayne Haskins. Shortly after it was announced Ryan Day would be taking over for Urban Meyer in 2019, Hartline almost immediately had his interim tag removed.

Just three years removed from his NFL playing career, Hartline views the challenge of helping young players develop and get to the professional stage as the perfect job for him.

“This role, it’s a very father-line approach. You’re helping nurture and develop young adults,” Hartline said. “I don’t think I had that mindset 10 years ago or even five years ago. I am here to develop the best wide receivers in the country and see them reach their potential, graduate and move onto the next level.”

Playing in the Rose Bowl is something Hartline didn’t get to experience as a player. He played in two national championships in 2006 and 2007, but came up short in both. While he gets to cross off one bucket list item by coaching in the Granddaddy of Them All, Hartline said he is planning on winning a national title as well during his time on Ohio State’s coaching staff.

“Very humbled and blessed to be here. Never got to play in one, but great to be a part of one now as a coach,” he said. “I have also never won a national title. I hope to check off a win in that category.”