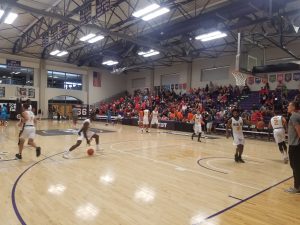 Jamel Morris banked in a floater to give Big X an 81-79 win over the Chattanooga Trenches in the first round of The Basketball Tournament, a $2 million winner-take-all event, at Capital University’s Capital Center in Columbus on Saturday.

Big X, a team comprised mostly of Big Ten alums, features former Ohio State players Andrew Dakich, who transferred from Michigan to Ohio State last summer, Jae’Sean Tate and Kam Williams. Tate, however, was in street clothes and did not play after breaking his finger earlier this month while practicing with the Milwaukee Bucks, and Williams was not in attendance.

After taking an early 8-6 lead, Big X trailed for the next 28 minutes until Douglas knocked down a three-pointer with 6:15 left in the fourth quarter to spot his club a 69-66 advantage and erase a 16-point deficit.

Big X still led, 73-70, with four minutes to go, which is when the Elam Ending is put into effect.

The Elam Ending mandates that the clock is vanished after the first stoppage under the four-minute mark in the fourth quarter of games. Officials establish a target score by taking the score of the leading team and adding seven points – then restart the game without a clock. The team that reaches that target score first wins. The rule is named after Nick Elam, a middle school principal from Dayton who has devoted most of his free time since 2004 trying to solve basketball’s problem of teams deliberately fouling when trailing late in games and therefore dragging out contests.

So with the score 73-70 in favor of Big X, the target score was 80. The Big Ten alumni squad came within striking distance when Morris knocked down two free throws to make it 77-72.

No. 13 seed Chattanooga answered with back-to-back layups by Trey Suttles, cutting it to 77-76, before Deandre Mathieu hit a three to bring the Trenches within one of the target score.

With Big X trailing 79-77, Morris drove the lane and was fouled while in the act of shooting. He made both foul shots to even the game at 79.

Morris again drove the lane and kissed his floater off the backboard to seal the victory for Big X.

The Big Ten alums will now play the No. 12 seed Primetime Players in the second round of the Midwest Region on Sunday at 4 p.m.