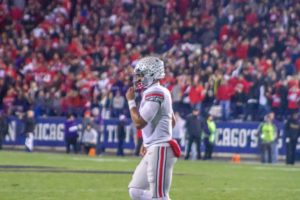 After a meeting on Saturday, the presidents in the Big Ten are “ready to pull the plug on its fall sports season” which led to a meeting between all Power Five commissioners on Sunday “to gauge if commissioners and university presidents and chancellors from the other Power 5 conferences … will fall in line with the,” according to a report by ESPN’s Heather Dinich, Adam Rittenberg, Mark Schlabach and Chris Low.

In the report, it said that during Saturday’s meeting with the Big Ten presidents, “a vast majority of Big Ten presidents have indicated that they would vote to postpone football season, hopefully to the spring.” No official vote took place in the meeting.

The report also states that, according to multiple sources, “the postponement or cancellation of the football season seems inevitable.”

The Big Ten presidents and chancellors are meeting on Sunday once again, this time with Ohio State incoming president Kristina Johnson, who was unavailable for the Saturday meeting, according to reports.

There’s been too much work put in!! #WeWantToPlay

“As parents, we strongly believe our sons want to play the upcoming season and have full trust the university and coaching staff along with medical experts have found a safe way for that to occur,” the letter reads.

One of the more vocal advocates to playing a season has been a usual Ohio State for in Clemson quarterback Trevor Lawrence, who wrote at length why he believes there should be a college football season in 2020.

People are at just as much, if not more risk, if we don’t play. Players will all be sent home to their own communities where social distancing is highly unlikely and medical care and expenses will be placed on the families if they were to contract covid19 (1)

There has been no official statement by the Big Ten as far as a decision on the fall football season.