Big Ten Championship To Kick Off At Noon On FOX 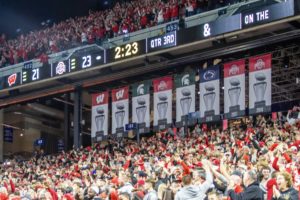 The Big Ten Championship Game will kick off at noon, the conference announced on Saturday morning.

The game, which is set for Dec. 19 at Lucas Oil Stadium in Indianapolis, traditionally kicks off at 8 p.m. It will now be part of FOX’s Big Noon Kickoff coverage.

Ohio State currently sits atop the Big Ten East Division at 4-0, but the cancellation of Saturday’s game at Illinois means the Buckeyes must play their final two games of the season at Michigan State and against Michigan to be eligible to play in the Big Ten Championship Game.

Northwestern is in control of its own destiny in the Big Ten West Division, meanwhile. The Wildcats are 5-0 and have a head-to-head victory over Wisconsin, the only team in their division with one loss.

Ohio State’s games against the Spartans and Wolverines are scheduled for noon, as well, which means the Buckeyes will presumably finish their season with four-straight 12 p.m. kick offs.