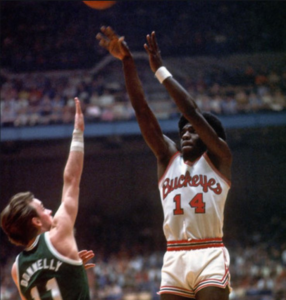 The success of the 1979-80 does not compare to some of the other great teams in Ohio State history, but it was an incredibly talented team that featured a trio of Buckeye greats.

“It was Herb Williams’ junior year, it was Clark Kellogg’s freshman year, and it was Kelvin Ransey’s senior year, they had a good season, but they did not win the Big Ten,” Caryer said. “And they lost to a UCLA team which had several NBA players on it. No disrespect to UCLA, but Ohio State was better.”

Williams led the Buckeyes with 17.6 points and 9.1 rebounds per game, while Ransey ranked second in scoring (16.2) and first in assists with 5.9 helpers per contest. Kellogg added 11.6 points, 8.0 rebounds and 2.5 assists per game as a freshman, and junior guard Carter Scott averaged 10.4 points.

While Williams and Ransey were the leading scorers for the 1979-80 Buckeyes, White emphasized the importance of Kellogg’s versatility on the offensive end.

“That team had the luxury of a star player in Clark Kellogg, who played like a guard. He was a big guy, almost 6-9, but had ball-handling skills like a guard, could shoot from the perimeter like a guard,” White said. “Even without a three-point line, he was able to stretch the floor because of his size. And that made him a very difficult matchup.

“And that was just a really good shooting team. So, they were able to really play off Clark, and his size, and playmaking ability and matchup problems that he created and make a lot of jump shots when Clark was able to draw attention and Kelvin Ramsey was one of the best at banging jump shots home.”

Ohio State’s talented trio represents one of the best in program history, with Williams playing 18 seasons in the NBA after earning third-team All-American recognition. Ransey averaged 15.2 points and 6.9 assists as an NBA rookie, finishing one vote behind Darrell Griffith for rookie of the year in 1981 following a consensus second-team All-American season in Columbus.

Kellogg had one of the best rookie campaigns in NBA history in 1982-93, averaging 20.1 points and 10.6 rebounds, but his career was cut short by chronic knee problems.