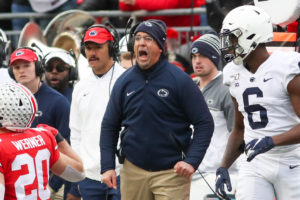 Behind Enemy Lines is Buckeye Sports Bulletin’s newest series on how teams outside of Ohio State — but relevant to the Buckeyes through history or through skill level — are recruiting in the current cycle. Up next is Penn State.

Firstly, new staffers have to soften the blow of the departure of their predecessors to any recruits interested in the school. Making sure that recruits know the plan moving forward and know that they’re still wanted, regardless of the change in their primary contact can be the difference between landing a recruit and falling completely off the map for him.

Secondly, the new coaches have to then build out those relationships on the fly, either re-establishing contact with prospects they were recruiting in a previous job, or by trying to do what other coaches have years to do in just a few months, and establishing a brand new relationship with the targets of your predecessor.

Both of those things take time, which is why you’ll often see a lull in recruiting for several months when a new position coach takes over. Even Kerry Coombs, who was only out of the college game for a few years, required two months before he really started to find his groove again on the recruiting trail.

At Penn State, the growing pains of four new staffers, including a new offensive coordinator have only been amplified by the NCAA enforced dead period, nearing its third month in place, as a response to COVID-19. New OC Kirk Ciarrocca, offensive line coach Phil Trautwein, wide receivers coach Taylor Stubblefield and defensive line coach John Scott Jr. would have usually used the spring months to visit high schools, host recruits and get to know their new targets.

“I think Penn State’s probably been impacted on some level as much or more than a lot of other programs in the country because of the limit on visits,” Roar Lions Roar senior editor and recruiting expert Matt de Bear told BSB. “They had a (recruiting) weekend in late January before the February dead period and because of the way the spring break calendar fell for the university this year, that was the last weekend they had kids on campus.

“They were supposed to have kids back for the first spring practice in March for unofficial visits and were unable to. And with three new position coaches this year, two of whom were hired pretty late because of when the openings came out, it was kind of a unique spot. They weren’t really able to fit a whole lot of time with prospects.”

Still, despite the new faces on the staff, Penn State has been able to generate some momentum through the shutdown. The Nittany Lions entered the extended dead period with two commitments, and currently sit at 12, landing 10 prospects since March 26. Leading the way in that group was the first domino to fall, four-star Maryland offensive tackle Landon Tengwell, considered the No. 49 player in the 247Sports Composite.

“(The recruits) see classes filling up, and Penn State’s no different,” de Bear said. “They see these spots starting to get taken. And in a year (where) Penn State’s probably going to have a class closer to 20 rather than 25, those kids that are on the borderline that don’t necessarily have that spot for as long as they want to wait, and are jumping on it.

“What really happened for Penn State was they got Landon Tengwall, the four-star offensive linemen from Maryland in late March. And that really started the run. But if you look closely, four or five of the kids that committed are all defensive backs. They got one defensive back, (safety Jaylen Reed) and I think it kind of started a little bit of a cascade effect because of that. Like I was saying, these kids know there’s only so many spots and they want to make sure they get one on board as soon as they can.”

With roughly 10 spots left in what is expected to be a smaller than 25-man class, those connections could come in handy for Penn State in recruiting players like Rocco Spindler and Garrett Dellinger, the offensive line duo from Michigan. However, when it comes to finishing up front, PSU appears to have its eyes set on bigger targets: five-star tackles Nolan Rucci and Tristen Leigh.

“I think Lee was real high on Penn State going into like the holidays last year, and not that he’s still not, but I think he really blew up with the Under Armour camp in December, and at that run of Clemson, LSU, Alabama, Auburn, all those southern offers, I think really opened his eyes,’ de Bear said. “With him, I think the longer it goes, the longer he waits to take visits the better, because I think if Penn State can get him back on the campus, they’ve got a great shot. I think they’re still fighting from behind.

“Rucci, he’s the son of a former Penn State lineman. His father Todd played for Penn State back in the eighties. His brother plays tight end at Wisconsin, but by all indications, from what we’ve heard, it’s been, it’s primarily a Penn State and Clemson battle. I know there’s some Wisconsin rumblings from other people, but everything that we’ve heard seems to indicate it’s Penn State probably on top of Clemson, but by no means is it a sure thing.”

Both players fit the mold of player that Penn State is primarily focusing on right now, as guys who could see their recruitments go well into the fall.

“I think Lee and Rucci are probably the quintessential examples for Penn State, at least, as guys that have the ability to wait as long as they want, or don’t want to make a decision just because they’re going to have a spot wherever they want go when the time comes. It’s not like they’re going to get shut out somewhere.”

“Trautwein has really kind of expanded Penn State’s offensive line recruiting. It’s probably not going to pay huge dividends this year, but they’ve gotten on the board with a lot of guys.”

With those top targets, among others still on the board, Penn State appears to be eyeing another very strong class in 2021, hovering right around the low teens range that it has filled in many of James Franklin’s classes during his tenure.

“I would think that there’s going to be a lot of decommitments nationwide this fall. I’m assuming kids are going to be able to start visiting again, and I think that’s the real unknown in this. But, I think, just kind of seeing where they are, where they’ve been and who’s left on the board, I think, 10 to 15 is probably a pretty realistic projection,” de Bear said.