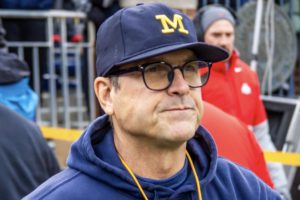 Behind Enemy Lines is Buckeye Sports Bulletin’s newest series on how teams outside of Ohio State — but relevant to the Buckeyes through history or through skill level — are recruiting in the current cycle. Up next is Michigan.

The extended, surprise dead period that kicked into gear in response to the COVID-19 pandemic has created a unique situation for college football programs across that country that, along with several other spring tasks, have had their spring recruiting plans thrown out the window. For some schools, that has meant a sudden break in any sort of recruiting momentum, holding off on taking commitments to allow for more visits later in the season.

For others, however, the dead period has sparked massive numbers of commitments, thanks to extensive Facetime and Zoom calls, virtual visits, and the relentless effort of staffers. Ohio State is among the latter group, reeling in eight new pledges since March 15, and using that to catapult into a nearly unreachable perch atop the recruiting rankings. Joining the Buckeyes are schools like Tennessee (16 commitments since March 7), North Carolina (nine since March 3) and USC (eight since March 11), along with a very familiar face: Michigan.

The Wolverines, who currently boast the nation’s No. 10 class in the 247Sports team rankings, have landed 11 commitments since March 25, nearly all of their 13-man class, save for the top two members: quarterback J.J. McCarthy and tackle Giovanni El-Hadi.

In Ohio State’s case, there was a concerted effort from the coaching staff to get commitments in now, to help focus on just a few top targets moving forward. Was the same true at Michigan, or did this commitment push happen on its own?

“I think it’s kind of a mix of both,” EJ Holland, the recruiting insider for The Wolverine and Rivals explained to BSB. “One, it’s so recruiting focused right now. During this time period, obviously there’s nothing to really do other than to recruit for the coaching staff. They’re still having a lot of Zoom meetings with the team and all that, but most of their efforts have been focused towards recruiting. I think Jim Harbaugh and his staff have done a tremendous job of keeping in contact with recruits, families, they’ve done different types of innovative things in regards to digital communication and virtual recruiting, and I think that’s helped out a ton.”

Still, Michigan has looked to get several players in the class sooner rather than later.

“I think they’ve made pushes for certain guys to commit earlier than expected, like with (center) Greg Crippen, I know they really pushed him hard to commit; (center) Raheem Anderson, there were a few question marks about him, but once they pushed, they got them on board immediately,” Holland said. “Others have been kind of at random, like (cornerback) Ja’Den McBurrows from Florida, a guy that’s never visited, decided to go ahead and commit, and then you have a regular recruitment, like a (wideout) Markus Allen. He’s always been a Michigan lean, and even though he’s never visited campus, he decided, ‘hey, I don’t know when I’m going to be able to visit. So might as well pull the trigger now because this is a school that I’ve wanted to go to.’

“So I think it’s been a mixture of kind of different elements, but I do feel like during this time period, even though we don’t have on campus visits going on across the country, and that’s where Michigan usually thrives, they’ve done a really, really good job with virtual recruiting.”

Michigan hasn’t just pulled in eyes because of the number of commitments over this dead period, though. The home state of some of those recruits has drawn quite a bit of attention, because the Wolverines have pulled four pledges out of Massachusetts. While that may look a little strange, it’s actually part of a strategy that Michigan has been working through for a couple years now, in an attempt to build a pipeline in a state with a rapidly growing prep football culture.

“They definitely see it as a pipeline moving forward,” Holland said of The Bay State. “They got three from Mass last cycle, (athlete) Eamonn Dennis, (outside linebacker) Kalel Mullings and (guard) Zak Zinter. Zinter and Mullings were both Rivals 250 prospects and Mullings played in the All-American Bowl. There is top level talent in New England. I went out there for one of my recruiting trips and was really impressed with the Independent School League, the ISL, even though they don’t have a lot of depth out there, there is a lot of talented prospects, and that league alone has Mullings, Zinter, (linebacker) Tyler Martin who’s a four-star in 2022, (tight end) Louis Hansen, who’s committed to Michigan this cycle.

“So they can play out there for sure, it’s just more like, ‘Hey, we’re going to recruit the top five or six guys because after that there’s a pretty big drop off.’ ”

Michigan looks primed to keep the Massachusetts pipeline going as well, thanks partially to defensive coordinator Don Brown, who coached in the Northeast for years.

“I think it’s going to be a regular thing moving forward,” Holland said. “I think New England is on the rise, especially in the ISL in particular, and like you mentioned, Don Brown has connections there. He is from Massachusetts, he coached there at various schools, and so he still has, obviously, deep ties down there, and I think coaches, parents, kids, they all really trust Don Brown and that’s really helped with Michigan’s push there. Don Brown’s familiarity with the high school coaches there, with the parents there, in turn, I think gives Michigan a little more leeway. Like, ‘Hey, let’s take a chance on this kid because Don Brown knows his family. He knows the coaches. He knows what kind of kid he can be at Michigan.’ ”

Now, not all things are perfect in the Michigan class. Several top targets remain, and have some heavy hitters providing competition for their signatures. Leading that group is one-time Ohio State halfback target Donovan Edwards, a four-star from Michigan. The Wolverines appear to be in a battle with Georgia, among a few other SEC schools for Edwards, but Holland sees UM winning out come signing day.

“Michigan’s been the constant (for Edwards), that’s the biggest thing is they’ve been the constant school,” Holland said. “At the end of the day, I do see Donovan ending up in the class. I would be a little wary of Georgia just because they recruit among the best in the country.  Georgia always has a top five class and they’ve done a tremendous job of recruiting nationally as well. So I think Georgia is probably the primary threat right now. He does like Alabama as well. I know he likes Clemson too, but those situations are kind of up in the air depending on what those teams decide to do. The only real concern I have is, is Donovan looking for reasons to not stay at home?

“But overall, I do think since Michigan has been the constant. His high school coach, Ron Bellamy played at Michigan, he has a couple of former teammates there, Cornell Wheeler and Makari Paige signed with Michigan this past cycle in 2020. I think all those factors are going to lead to him staying home. At the end of the day, I think he likes the process and he’s really given serious thought about leaving the state of Michigan, but at the same time, I ultimately see him see those connections and that constant presence by Michigan. When it comes to him putting pen to paper, I think it will be Michigan.”

Other top targets, like in-state four-star offensive tackle Rocco Spindler, are harder to get a read on, who Holland describes as essentially the opposite of Edwards.

“Well, I think with Donovan, he does a really good job of staying out of the limelight and playing things close to the vest,” Holland said. “So they’re two completely opposite recruits in the way they approach things. Donovan stays away from everything and really tries to keep things to himself, Rocco’s just all over the place. Rocco, knows how to play the game. He’s very smart, and it seems like he enjoys the media attention as well. At the end of the day, this one’s going to come down to visits.

“Right now I don’t think there’s any true leader. This is going to be one of those recruitments that you’re going to have to read beyond what’s on the surface, and so we won’t really have a really good idea of where things stand until Rocco’s really close to making that decision, which again, I don’t expect to be until after he’s allowed to make visits. So it’s probably going to go all the way to December, and I envision Donovan also going down to December. So at the end of the day, do I see Rocco ending up at Michigan? I think it’s very possible.”

For Michigan, the outcomes of those two recruitments could ultimately determine if this is another top 10 class for Harbaugh, his fourth in Ann Arbor, or if it drops into the teens.

“I think they are going to be hovering right around the 10 area, kind of like last year,” Holland said of Michigan’s likely standing in the final team rankings. “Last year they finished No. 11. This cycle they’ve been as high as No. 5, right now they’re No. 9 (in the Rivals rankings). There’s a large gap between the top half of the class, you look at the top half of the class right now and you have J.J. McCarthy, Giovanni El-Hadi, Louis Hansen are all top 100 kids. Greg Crippen and Raheem Anderson are top 250 kids, and then you have a two-star defensive end and Dominick Giudice, and then you have a kicker and you have a project defender from New England in T.J. Guy. You have a couple of three stars.

“There’s kind of a divide between the top half and the bottom half of the class. So it’ll just be interesting to see how Michigan closes out. I think May will be big, there’s a possibility of landing (linebacker) Junior Colson and (guard) Drew Kendall who are both top 100 prospects. But yeah, I mean, overall, Michigan’s always going to be hovering in that range and I don’t expect this cycle to be any different. Closing with those guys, Donovan and Rocco specifically, would be huge and I think will be a determining factor on where they finished in the rankings, but it’s definitely going to be in the top 15 for sure.”