Back For The Brotherhood: Haskell Garrett’s Preparation For His Final Season 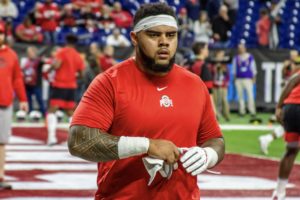 Last season, Haskell Garrett miraculously battled through a gunshot wound and other adversity to emerge as one of the top defensive linemen in the country.

Garrett put himself on the radar of NFL teams in 2020, compiling 20 tackles, with four tackles for loss and two sacks as a senior. He established himself alongside nose tackle Tommy Togiai to create one of the best run-stopping interiors in the Big Ten.

After the season ended, Garrett and Togiai became eligible to enter the NFL Draft.

Togiai declared, forgoing his final season as a Buckeye to pursue his dream of playing professional football. But Garrett decided to come back to Columbus for a super senior season — a decision that surprised many NFL scouts.

But why did Garrett want another year at Ohio State?

As a graduate senior or “super senior,” Garrett will anchor the starting defensive line unit. He assumes the defensive tackle position alongside Tyreke Smith and Zach Harrison at defensive end and either Taron Vincent or Antwuan Jackson at nose tackle.

Garrett said the defensive line room is full of potential. He looks forward to seeing this group compete in the first game against Minnesota and throughout the 12-game regular season.

“I think the sky’s the limit. We have a lot of talent in our room and a lot of depth,” Garrett said. “It’s going to be special, and there’s no other defensive line room that I’d want to be in.”

Garrett also believes the defensive line needs to be the “heart of the defense” this season. He wants his surrounding teammates to set the tone early in a game, frequently reaching the backfield and disrupting the opposing team’s offense.

With his return to Ohio State, Garrett starts the year as a pre-season All-American and candidate for the Bednarik Award.  He appreciates the recognition but still recognizes the need to improve his overall performance on the field.

Garrett has worked to be more versatile by developing his three-technique and nose tackle skills during fall camp. To better understand his development, he sought help from some former Ohio State defensive tackles.in fall camp

“I’ve asked players before me like DaVon Hamilton and B.B. (Robert) Landers that played that position— and excelled at that position — and take all that information from what I see on film and from their advice to apply it to my game.”

Garrett is one of the country’s best defensive linemen, with another offseason of improvement under his belt. He looks poised to make another significant impact on the Buckeye defense this season.