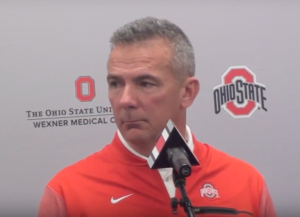 In his final media availability with reporters for the week, head coach Urban Meyer fielded questions Tuesday on the Big Ten coaches teleconference to preview Ohio State against Michigan.

As the No. 10 Buckeyes (10-1, 7-1) returned to practice at the Woody Hayes Athletic Center four days away from The Game, a noon kickoff Saturday at Ohio Stadium to be televised on FOX, how has Meyer’s team started to prepare for the No. 4 Wolverines (10-1, 8-0) with the Big Ten East Division on the line?

He shared status updates for several OSU players, discussed his experience against U-M in the rivalry and more on the call.