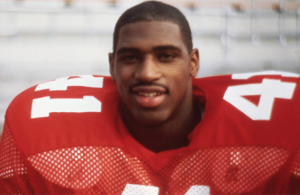 We will be breaking down some of the underrated running backs in Ohio State history. For this installment of Assessing Underrated Ohio State Running Backs, we spoke with former Ohio State assistant coach/recruiting coordinator Bill Conley and former Buckeye fullback Vaughn Broadnax for their insight on the featured back. First up in this series is former Buckeye standout Keith Byars.

Although he missed most of his senior season due to injury, Byars still ranks second in program history with 50 career touchdowns, behind only Pete Johnson’s 58. He also boasts the highest all-purpose yards-per-game average in Ohio State history at 203.4 from his junior season in 1984.

Broadnax was entering his junior season for the Buckeyes when he got a firsthand look at Byars on a daily basis after hearing so much about the Dayton Roth standout.

“When Keith Byars came in as a freshman, I had known him from Dayton Roth High School football, basketball, and on the track and I knew he was a freakish athlete,” Broadnax said. “When you have a guy that big, that’s a little smaller than you, come in and you see his physique, you see his natural ability, and you just say, ‘Wow.’”

Beyond his physique and natural running ability, Broadnax came away impressed with Byars’ mentality as well. Not only did Byars have the physical capabilities to dominate on the field, but he developed into an all-around team player at Ohio State.

“Keith was moved to fullback as a freshman, and I know he didn’t like it,” Broadnax said. “But I’ll tell you what, that experience helped him have a long career in the pros, because when he had to block for someone, he realized that that was for the team. And he became a great teammate throughout his college and pro days, despite his injury.

“But the thing about Keith was once he got going, oh, he was hard to tackle. He really had great balance. Now, he wasn’t a shifty guy, but he had deceptive speed. And once he got his speed going, you didn’t want to hit those massive thighs as a tackler.”

Beyond his dynamic athleticism, Byars brought a diverse set of skills that made him a nightmare for opposing defenses. If teams script their defense to stop Byars inside, he could beat them outside, and if they load up against the run, he could win in the passing game.

“The thing about Keith Byars was if you ever had to defend him, you had to defend the entire athlete because he was so versatile. He could do everything,” Conley said of Byars. “He was a great short-yardage back the same time he had the speed and athleticism and agility to make an off-tackle play end up being an 80-yarder.

“I mean, just his explosiveness, along with his power – that’s a tough thing to combat. It was tough for any one person to bring him down, because he had so much power as a runner. And if he pulled away, he could out-run all linebackers, and most defensive backs.”

Byars used his rare combination of power and speed to provide Buckeye fans with some of the most entertaining and impressive performances in program history. When Ohio State found itself down 24-0 against Illinois in 1984, the talented tailback led the Buckeyes to an exhilarating 45-38 comeback victory with 274 rushing yards and five touchdowns, including a 67-yard dash with one shoe.

“I felt the shoe slip, and it just popped off,” Byars explained following the game. “I wasn’t about to slow down to go back and get it. I tried to get to the end zone as quick as possible and hope no one would step on my size 14.”

Conley remembers how the entire Scarlet and Gray squad rallied around the senior running back from Dayton, who put the team on his back .

“Things were looking bleak, very bleak. And then he broke that one, and that was like an energy shot for the whole football team,” Conley said. “Everybody’s spirits got up and there was no doubt we were going to come back.

“The damn shame about the whole thing with Keith is that if he would not have hurt his foot, he had the Heisman Trophy hands down. He was the leading guy in the nation going into the season.”

Byars was indeed a Heisman Trophy favorite after rushing for 1,764 yards and 22 touchdowns with 42 catches for 479 yards and two scores as a junior in 1984. In fact, to many, including Conley, Byars should have won the award over Boston College’s Doug Flutie in ‘84.

“There’s no doubt, you could ask any college football coach, ‘Who would you rather have on your team, Keith Byars or Doug Flutie? – and not taking anything away from Doug, he was a really good player – I don’t think anybody would have taken Flutie over Keith Byars. And really, I think, Flutie, the one play made his career. If that play doesn’t make it, he’s a good quarterback, but he’s not a difference maker like Keith Byars.”

Many fans point to Byars’ heroic ways against Illinois as a senior when reminiscing on his historic career, yet he had numerous standout games. Also in 1984, Byars scored five touchdowns in a 45-26 victory against Iowa, including three rushing scores and one receiving touchdown as well as one via his arm.

The prior season, Byars also displayed his versatility against Purdue. While leading the Buckeyes to a 33-22 win, Byars became the first Ohio State player in 34 years to gain 100 rushing yards and 100 receiving yards in the same game.

The Boilermakers had no answer for Byars, who rushed 23 times for 135 yards and two touchdowns, while also adding four receptions for 120 yards in the passing game. He could take a check down the distance, but his coaches were diligent in planning how to get the ball to their best player.

“He was a guy that you could use in so many situations, and so many down and distances, really,” Conley said. “The screen pass was big with him out of the backfield. Our quarterbacks at that time were good quarterbacks but they weren’t as they weren’t as mobile as a Rex Kern or, or some guys later on. So he had to rely on the backs to get all those yards. So every week, every game plan was designed, ‘What can we do to get the ball to Keith?’

“If teams liked to play him man on out of the backfield, put like a linebacker on him or something like that, that’s an advantage to us. Because he was much more athletic than the linebackers that were going up against him.”

Not only was he a mismatch for defenses with the ball in his hands, but Byars developed into a great blocker, in part thanks to the culture at Ohio State as well as his selflessness. In addition to his historic production, what makes Byars one of the best backs in school history is the fact that he had no weaknesses – he could do it all.

“He was a complete running back, probably more complete than any I can ever remember,” Conley said. “Because also you have to think about the role the running back played in blocking too, especially pass protection. He was a great run-blocking running back too and now today, that job often goes to an extra tight end in the game, not the running back.

“First, when you’re as big as Keith and as physical as him, I mean he could take on any rushing defensive lineman or linebacker. And so, you didn’t have to take him out of the game to pass protect. He was complete not just in terms of versatility in scoring points and making yards but his blocking ability.”