A Look Back At Ohio State Women’s Basketball’s Upset Win Over No. 2 Louisville 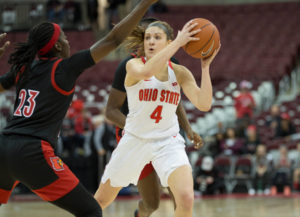 On the morning of Dec. 5, Ohio State women’s basketball was 4-3 and had losses to Ohio, UConn and South Dakota already on its résumé. Two of those losses would be to ranked opponents by the end of the season, but that defeat at home to the Bobcats showed that this incredibly young group had a lot to learn.

Well, the team had to learn fast if it wanted a chance at the No. 2 Louisville Cardinals, a team that came into the game 8-0 on the season, and had won 102 straight games against unranked opponents ahead of the matchup.

The most recent of those eight Cardinals wins was against none other than No. 1 Oregon, a team led by national player of the year and No. 1 pick in the WNBA draft, Sabrina Ionescu, as well as the No. 2 and No. 8 picks in Satou Sabally and Ruthy Hebard. Louisville defeated the Ducks 72-62 in the U.S. Virgin Islands Paradise Jam just five days before it headed to Columbus for what seemed to be a simple win over the Buckeyes.

But Ohio State had other plans.

The Buckeyes earned one of the biggest upsets of the season in all of college basketball, and did so by shutting down two of Louisville’s best players, getting to the basket for easier shots in the second half and, above all, getting and making shots at the free-throw line.

Ohio State had a starting five of guards Janai Crooms, Braxtin Miller and Kierstan Bell, and forwards Aaliyah Patty and Dorka Juhasz, a lineup that would eventually switch Crooms and Bell out for Madison Greene and Jacy Sheldon by the second half of the seeason. Crooms and Bell brought more energy, but less composure, and it led to a more sporadic, inconsistent style of play.

Luckily for the Buckeyes, the duo had a strong effort against Louisville, combining for 25 points on 9-of-18 shooting, including this nice drive early by Crooms that was an omen for good things to come.

The first quarter was a lot of back and forth, with Ohio State holding a lead for much of the frame and ended the first with a 19-17 advantage, but never by more than four points. Rebeka Mikulasikova, who was tied for the team high with five points, hit both of her shot attempts, including this three. She finished with 11 points and four rebounds on a perfect 3-of-3 shooting.

Early on in the second quarter, Louisville looked ready to end this upset attempt. The Cardinals immediately went on a 12-2 run to take a 29-22 lead with 4:24 left in the half, much in thanks to six points by Dana Evans. Evans, who led Louisville with 18.0 points per game this season, hit on her average with an 18-point effort, while also adding three steals on the other end.

That seven-point Louisville lead could have been a death sentence to the upset effort. It was the same strong second quarter that the Cardinals used to take down the Ducks, outscoring Oregon 24-8 in the second frame on the way to a double-digit win.

Ohio State, though, didn’t let the Cardinals take all the momentum into halftime, going on a 10-4 run of its own and trailing Louisville by just two, 33-31, heading into the third quarter.

It’s important to note that in many upsets, the underdog team often pulls ahead through unexpected poise, something that often shows up through a lack of turnovers. Ohio State didn’t do that, turning the ball over 17 times compared to just 11 times by the Cardinals. How about second-chance points? Nope, 11-3 advantage to Louisville.

No, instead, Ohio State came out in the second half and brought a fire to the court that the Cardinals, fresh off a grueling tournament in the Virgin Islands, couldn’t keep up with, and Bell and Crooms were the major reasons why.

After a quiet opening 20 minutes, the pair combined for 19 of their 24 points in the second half, over half of the 36 second-half points the Buckeyes tallied.

With the the first shot of the second half, Bell hit a three to immediately give Ohio State a one-point lead. After Louisville went back up three, Crooms hit a shot of deep from her own to tie the game at 40 with 5:20 to go in the quarter. The Cardinals again responded, but a make from Bell, a Louisville turnover, then a Mikulasikova three gave the Buckeyes a two-point advantage.

Ohio State would not trail again for the rest of the game.

With 1:45 left to go in the third and the game again tied, Bell made a tough layup and converted the and-1 to put Ohio State back up, and then the freshman guard made another highlight play less than 40 seconds later.

Off an Evans miss, Bell moved the ball up fast in transition, but stayed composed enough to find an open Crooms for an easy layup that gave Ohio State a 50-45 lead that it would take into the fourth quarter.

In the final quarter, the Buckeyes had nine shot attempts. Louisville had 18. It didn’t matter. The Cardinals kept cutting the deficit just for Ohio State to continually counter back and maintain the lead, and eventually, there are just some plays that even the second-best team in the country would never have an answer for.

This sequence by Bell is, to put it simply, ridiculous. It starts with a remarkable two-handed steal, moves into a 3-on-1 that is not in her favor, and then ends with a gorgeous spin move for two crucial points with 6:31 to play.

“I knew the team needed me, so you know I had to step up and take part, so that’s what I did and it worked out,” Bell said after the game. “That’s a team win right there.”

This Juhasz layup with 5:45 to play was the last field goal that the Buckeyes made in the game. From there, they rode hot free-throw shooting out to secure the win.

Ohio State hit seven of eight attempts from the charity stripe following that final basket, and finished the game hitting 19 of 23 from the free-throw line compared to just 7 of 12 from its counterparts. This 82.6-percent rate from the line came after shooting a brutal 56.5 percent (61 of 108) through the first eight games, including an absolutely abysmal four-game stretch of shooting 46.2 percent (24 of 52) leading up to this matchup.

“We’re working on it every day, I’m telling you, we’re in practice every single day,” Ohio State head coach Kevin McGuff said on the team’s free throw shooting following the win. “We’re working on it, and it was great to see our kids step up, and that was, you know we weren’t going to win unless we made those free throws.”

In the fourth quarter, the Buckeyes held the Cardinals to 5-of-18 shooting on the way to their largest win of the season.

While Evans found some success scoring, Louisville’s two picks in the WNBA Draft, Jazmine Jones and Kylie Shook, did not. Ohio State shut Jones and Shook down, with the pair combining for eight points on 3-of-16 shooting. Jones, a first-round selection for the New York Liberty, fouled out in 20 minutes.

Ohio State, early in the season with one of the youngest rosters in the country, was not intimidated by anything that Louisville threw at them. The high-energy style that was brought by Crooms and Bell paid off in strides, but that’s not to say that the Buckeyes made a mistake by having the pair come off the bench later in the season.

Sheldon and Greene matured into a more stable backcourt duo, and Ohio State finished the season 21-12 a lot in part to the improved play of both of those freshmen.

But, for one night in December, Ohio State took it to a Louisville team that may or may not have been on a hangover from a major tournament five days prior. Regardless, the Buckeyes won this game not from a fluke hot-shooting night or a rare level of composure.

Ohio State beat Louisville by being the better team for 40 minutes, and by playing the best version of the style it was trying to play just eight games into the year.

“We beat a great team,” McGuff said. “Louisville, they’re an excellent team, I thought they played really hard, and it’s a great win for us.”