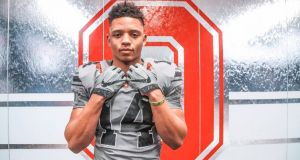 On the eve of the spring game, Ohio State sealed the deal with one of its top targets when Ronnie Hickman announced his commitment to the Buckeyes.

The four-star athlete from Wayne (N.J.) DePaul Catholic arrived in Columbus on Friday for his latest visit to OSU, roughly two months since he took an unofficial visit to campus the weekend of Feb. 3.