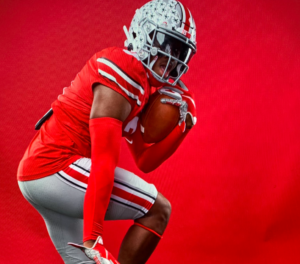 2023 Jacksonville (Fla.) Trinity Academy five-star athlete Treyaun Webb included Ohio State in his top three schools, along with Georgia and Oklahoma on June 23. He also said that these will be the three schools he chooses from when he makes his decision in August on CBS Sports.

Webb is ranked as the third-best athlete and No. 34 overall prospect in the class. He has an 11.26-second 100-meter dash time and has also shined in track at high school, becoming a Jacksonville.com All First-Coast honorable mention last year.

The 6-0, 188-pound Webb is likely to play running back at the next level, and he took an unofficial visit to Ohio State on June 8. He followed that visit with a pair of unofficial visits to both of the other finalists, first going to Georgia on June 15 and then Oklahoma on June 18.

Webb was a previous commit for the Bulldogs, but decommitted back on Jan. 9. The Buckeyes had an offer out to him months prior on Aug. 1, 2020.

Ohio State appears to have Webb as one of its two top running back targets for 2023. The other is Leigh Acres (Fla.) Leigh Senior five-star Richard Young, who, like Webb, visited the Buckeyes on June 8.