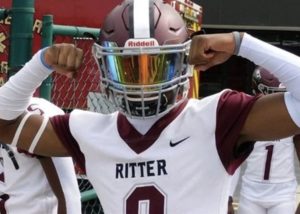 Burden, who is the No. 2 wide receiver and No. 14 prospect overall in the 2022 class, included the Buckeyes in his top schools along with Alabama, Georgia, Missouri and Oklahoma.

He reeled in 93 receptions for 2,046 yards and 27 touchdowns in two seasons with the Lions.

The 6-foot-2, 194-pound wideout received an offer from wide receivers coach Brian Hartline in April, and though he has not visited Columbus yet, the Buckeyes are expected to play a major role in his recruitment due to their ties in St. Louis and recent prowess in recruiting receivers.

With the talented wide receivers already on the team and two more on their way in January in Massillon (Ohio) Washington four-star Jayden Ballard and Philadelphia St. Joseph’s Prep four-star Marvin Harrison, the Buckeyes have room to be selective in their pursuit of players at the position for 2022.