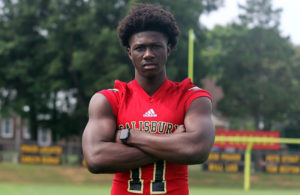 The 6-2, 220-pound Walker is considered the fourth-best outside linebacker and No. 50 prospect overall in the class of 2022, as he’s recorded 121 tackles, eight tackles for loss, six pass breakups, three forced fumbles, two sacks, two interceptions and one defensive touchdown to lead the Hornets – who did not play last season due to the pandemic – to an appearance in the state championship game in 2019.

Walker landed an offer from Ohio State linebackers coach Al Washington last May but has been unable to visit campus due to the ongoing recruiting dead period. That makes is very unlikely he’ll pick the Buckeyes later this month.

That said, the Tigers are considered the odds-on favorite to land Walker’s pledge given his relationship with Clemson junior defensive end K.J. Henry, a childhood friend whose father coached them when they were younger.

Ohio State has already landed commitments from three of the nation’s top-rated linebackers in the class of 2022 in Marysville, Ohio, four-star Gabe Powers; Kettering (Ohio) Archbishop Alter four-star C.J. Hicks; and Bloomington (Ind.) South four-star Dasan McCullough. The Buckeyes could add one or two more, though, with Manassas (Va.) Unity Reed five-star Shawn Murphy and Manvel, Texas, three-star Justin Medlock among those holding an offer from the staff.