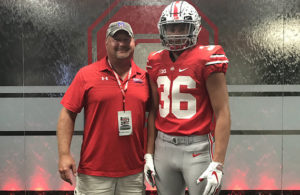 The 6-4, 220-pound Powers is considered the second-best outside linebacker and No. 45 prospect overall in his class, as he recorded 90 tackles to lead the Monarchs to the state playoffs last fall. He picked Ohio State over offers from programs such as Boston College, Florida State, Kentucky, Michigan, Michigan State, Minnesota, Notre Dame, Penn State, Pittsburgh, Stanford, Tennessee, West Virginia and Wisconsin, among others.

Powers — who lives roughly 30 minutes northwest of Columbus — made his first trip to campus last August, at which time he met with linebackers coach Al Washington and director of high school relations Ed Terwilliger. He then made two additional unofficial visits over the fall, including the 34-10 win over the Spartans in October and 28-17 win over the Nittany Lions in November, and picked up an offer from the staff just days ahead of his most recent visit.

Powers was among the dozens of prospects expected to make their way back to campus this spring, but that was put on hold amid the coronavirus pandemic. So rather than wait for things to open back up to make his college decision, he now becomes the fourth member of Ohio State’s 2022 recruiting class, joining West Chester (Ohio) Lakota West four-star offensive tackle Tegra Tshabola and four-star cornerback Jyaire Brown, as well as Kettering (Ohio) Archbishop Alter four-star linebacker C.J. Hicks.