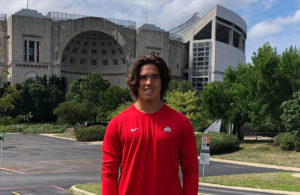 The 6-6, 235-pound Christian – who is considered the 19th-best tight end and No. 370 prospect overall in his class – landed an offer from Ohio State and Tennessee during a two-day period in early June, with head coach Ryan Day, offensive coordinator Kevin Wilson and executive director of football relations Tim Hinton leading the charge for the Buckeyes.

NCAA-sanctioned visits are not permitted during the current recruiting dead period, so Christian took matters into his own hands by making his first trip Columbus on Aug. 14, at which time he and his father took an unguided tour of campus and had lunch with freshman cornerback Lejond Cavazos, who is a family friend.

Christian then took a familiar trip to Knoxville the following weekend, as his father played defensive tackle for the Volunteers under legendary coach Johnny Majors while his mother cheered for the program. And though he’s been to campus numerous times in the past, neither one of his parents were pushing him to follow in their footsteps.

The staff is still looking to add another tight end in the current cycle to pair with Aurora (Colo.) Cherokee Trail three-star Sam Hart, but Buckeyes might instead bring on two in 2022, with Dickinson, Texas, four-star Donovan Green; Atlanta Westminster School four-star and Penn State commit Holden Staes; and Pilot Mountain (N.C.) East Surry four-star Benji Gosnell among the players at the position who hold offers thus far.