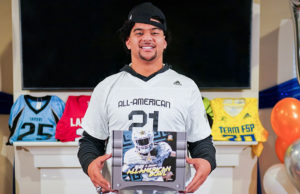 Rather than make his college decision on National Signing Day as widely expected, Sammamish (Wash.) Eastside Catholic five-star defensive end J.T. Tuimoloau plans to wait until he can take additional visits before announcing his school of choice this spring.

“J.T. will not be signing next Wednesday,” Tuimoloau’s father, Ponce Faletoi, told 247Sports national recruiting editor Brandon Hufffman on Jan. 28. “He won’t be making a decision until at least April. He still wants to take visits. Whether those are officials when the NCAA opens it up, or us going out and checking those schools out, he still wants to visit a few schools.”

Prospects have been unable to take official or unofficial visits since the NCAA implemented a recruiting dead period, which has been extended multiple times and runs through at least April 15. However, Yahoo Sports’ Pete Thamel reported on Jan. 27 that the Division I Council could soon change it to a quiet period, which would allow prospects to once again make on-campus visits beginning April 16.

If for some reason the NCAA extends the current dead period beyond April 15, Tuimoloau and his family will consider taking visits on their own dime.

“He wants to get out and see Alabama and Ohio State with us, just so we’re all comfortable,” Ponce said.

The Buckeyes have long been considered the favorite in Tuimoloau’s recruitment thanks to his relationship with head coach Ryan Day, defensive line coach Larry Johnson and wide receivers Gee Scott and Emeka Egbuka, the former being his former teammate and the latter being a fellow Washington native. But it’s clear he’s not ready to make a decision, so Ohio State’s staff will have to wait a few more months before they potentially receive good news.