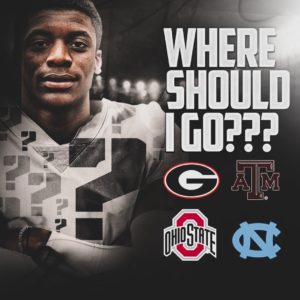 The 6-0, 180-pound Grimes — who is considered the top-rated cornerback and No. 7 prospect overall in the class of 2021 — has been on the Buckeyes’ radar for more than a year, as he landed an offer from linebackers coach and area recruiter Al Washington in May 2019. He then made his first and only trip to Columbus a few weeks later.

Grimes and his father spent a considerable amount of time during that weekend with Washington, who they’ve known since the Ohio State assistant was at Michigan, and then-defensive coordinator/secondary coach Jeff Hafley.

That visit — coupled with the significant improvement from Ohio State’s defensive backs under Hafley’s direction last season — put the Buckeyes at the forefront of Grimes’ recruitment. But then Hafley accepted the head coaching job at Boston College, which forced Grimes to reassess his options.

A trip to Athens in January had the Bulldogs trending for some time, while the Tar Heels made a move of their own over the last few months thanks to Grimes’ growing relationship with cornerbacks coach Dre Bly, a nearby Ch esapeake native who played at North Carolina before a lengthy career in the NFL.

The Buckeyes have tired to get back in the race for Grimes, with new defensive coordinator Kerry Coombs dropping by his high school just days after he was hired in late January. He also invited Grimes to attend a spring practice or the annual spring game, but that was cancelled amid the coronavirus outbreak.

Ohio State hoped to get Grimes’ back on campus for an official visit this fall, at the very least, before his original decision date. But his adjusted timeline means the Buckeyes are unlikely to be the pick later this month.

Most prognosticators expect Grimes to choose North Carolina instead, with the other finalists still trying their best to flip him from his pledge in the months thereafter.

The Buckeyes hope to add one more this cycle, though, with Grimes, Clemson four-star cornerback commit Jordan Hancock and Monroeville (Pa.) Gateway four-star safety Derrick Davis among those under consideration.