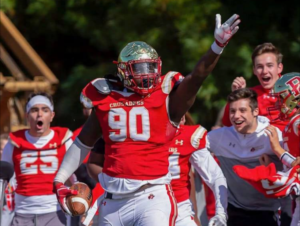 Asked by Rivals recruiting analyst Adam Friedman why he didn’t include Ohio State, which had long been consider the favorite in his recruitment, the 6-4 and 300-pound Malone cited his desire to play both baseball and football at the next level.

“The big key was the baseball part of things,” Malone said on Friday. “I really haven’t been talking to Ohio State’s baseball program as much as these other schools. Coach (Ryan) Day, Coach (Larry) Johnson and I were calling and texting a lot and that’s what I really liked about Ohio State. But like I said, baseball is a big thing in my recruitment and that was making it tough.”

Though Malone — who is considered the fifth-best defensive tackle and No. 55 prospect overall in the class of 2021 — is a talented first baseman who hit 15 home runs on the summer circuit and has received interest from several MLB teams, the Buckeyes don’t often allow players to play two sports in college.

Ohio State currently holds a pair of commitments at defensive tackle in Streetsboro, Ohio, four-star Mike Hall and Manassas (Va.) Unity Reed four-star Tyleik Williams, whose pledge on Aug. 27 essentially ended the Buckeyes’ pursuit of Malone since they’re both projected to play nose tackle at the next level.