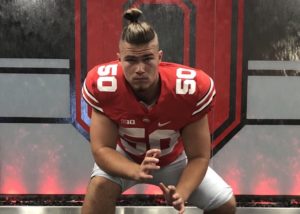 The 6-5, 295-pound Spindler — who is considered the second-best offensive guard and No. 49 prospect overall in the class of 2020 — is considered a heavy lean to the in-state Wolverines, with the Buckeyes and Fighting Irish both making a significant push, as well.

Although Ohio State is recruiting him as an offensive lineman, co-defensive coordinator Greg Mattison is considered Spindler’s lead recruiter. Their relationship dates back to Mattison’s time as Michigan’s defensive line coach and when Spindler was unsure if his future was along the offensive or defensive line.

Spindler was last on campus for the Buckeyes’ 28-17 win over the Nittany Lions on Nov. 23, and is set to return for his official visit on May 1-3.