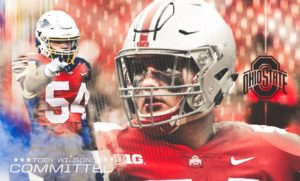 The 6-3, 273-pound Wilson is considered the 25th-best center and No. 2,230 prospect overall in the class of 2021. He garnered second-team all-Ohio Capital Conference Cardinal Division honors for the Braves last season.

Wilson, who camped at Ohio State in June 2019, chose the Buckeyes over scholarship offers from programs such as Air Force, Akron, Army, Navy, North Texas, Toledo, West Virginia and Western Kentucky. He eventually plans to follow in his father’s footsteps by becoming a coach after his playing days are over.