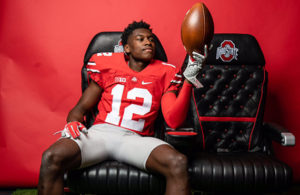 Despite trending toward Oklahoma for much of the last week, Bowling Green (Ky.) South Warren four-star cornerback Jantzen Dunn announced his commitment to Ohio State on Monday afternoon.

The 6-2, 178-pound Dunn is considered the 15th-best athlete and No. 248 prospect overall in the class of 2021, as he recorded 37 tackles and an interception to help the Spartans to the state playoffs last season.

Dunn made his first trip to Columbus for the win over Penn State last November, and finally landed an offer from the Buckeyes when he attended a spring practice on March 4. He then listed Ohio State in his top seven on March 28 alongside Georgia Tech, Louisville, Miami (Fla.), Oklahoma, Tennessee and USC.

The Buckeyes were considered the favorite in Dunn’s recruitment from the moment he received an offer from head coach Ryan Day and defensive coordinator Kerry Coombs, but a string of recent commitments — coupled with a few higher-rated targets looking to take an official visit once the recruiting dead period comes to a close — made it seem unlikely he’d end up in the class and allowed the Sooners to make a move.

Sources have indicated Dunn actually verbally committed to Oklahoma on Saturday, with Sooners head coach Lincoln Riley tweeting out his patented eyes emoji as a way to signal a looming pledge, only for Dunn to change his mind when Ohio State made his offer committable that same evening.

Ohio State not signed a player from Kentucky since Louisville Trinity three-star cornerback Rodjay Burns in 2016, but it’s worth noting the Buckeyes are also considered the favorite to land Lexington Frederick Douglass four-star offensive guard Jager Burton. That would give them the Bluegrass State’s top two prospects in the current recruiting cycle.