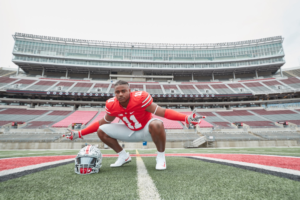 Less than a month after he received his offer from Ohio State, Pickerington (Ohio) Central 2020 three-star defensive end Ty Hamilton pulled the trigger Sunday when he announced his commitment to the Buckeyes.

The 6-3, 250-pounder is the younger brother of OSU senior defensive tackle Davon Hamilton (6-4, 310) and officially visited over the weekend.

Ty Hamilton earned an offer May 28 and camped June 6, working individually with sixth-year defensive line coach Larry Johnson throughout the afternoon on the outdoor practice fields of the Woody Hayes Athletic Center.

“They want me to be a strong (side) end or three-tech (tackle),” Hamilton said. “So it could be either of those two (positions). I feel good about it. I want to be able to play everywhere on the line, so you need to be able to do everything, all around.”

Hamilton officially visited Penn State last weekend, June 14-16, before making the local visit with Ohio State — which entered the race just in time. He was originally locked into an Indiana official visit before the Buckeyes swooped in. The third and final official visit was set for Michigan the weekend of June 21-23 with a commitment planned shortly afterward, but Hamilton arrived at his decision early.

Hamilton — the 247Sports composite’s No. 920 overall prospect, No. 47 strongside defensive end and No. 31 player in Ohio — is OSU’s 12th member for the 2020 class. His pledge also ends Ohio State’s drought on the defensive side of the ball. Previously, the Buckeyes had only Bradenton (Fla.) IMG Academy four-star defensive back Lejond Cavazos (6-1, 190), who rejoined the group April 12.

Hamilton follows Seibert and Toutant, who flipped from Penn State last Sunday, as the third commitment of the month for head coach Ryan Day and the staff.