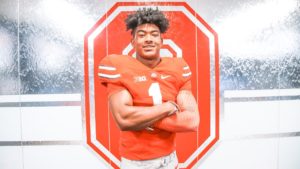 The 6-4, 200-pound Washington is considered the 100th-best wide receiver and No. 542 prospect overall in the class of 2020. He’s visited Columbus on numerous occasions since he landed a scholarship following a stellar performance at Friday Night Lights last summer, including for last season’s wins over Oregon State, Tulane and Michigan, which has given him the chance to bond with receivers coach Brian Hartline and several current and former players.