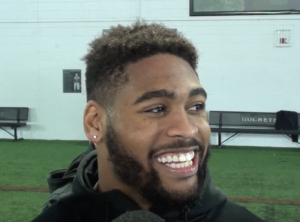 For its standards, the Ohio State defense experienced a season to forget in 2018. Numbers stumble into multiple different categories, but statistics in college football’s total defense (403.4 yards per game) and 51st-ranked scoring defense (25.5 points per game) told enough of the Buckeyes’ story.

Senior defensive end Jonathon Cooper headlines OSU’s players aware of the evidence from the past fall as the team looks to turn the page since its spring camp started with practices one and two last Wednesday and Friday, ushering in a new defensive staff among head coach Ryan Day‘s overhaul.

“We definitely took it to heart,” Cooper said Wednesday after Ohio State opened spring camp with its initial practice at the Woody Hayes Athletic Center. “We know that’s not us. We know that’s not the Silver Bullets. We’ll definitely come with the attitude and chip on our shoulder just because of everything that happened last year.”

Cooper kept his position coach, Johnson, but he noted how the rest of the defensive staff has entered spring camp with energy as Ohio State tweaks its scheme and corrects past miscues.

“As far as the defense goes, the coaches that came in are amazing,” Cooper said. “They took it and ran with it. We really like the intensity that they bring to practice every day. I think the players are really embracing the new scheme that we have. And I think we feel very confident this year.”

Coming from Michigan after four years (2015-18) as its defensive line coach and previously the Wolverines’ defensive coordinator in the four seasons prior (2011-14), Mattison is expected to bring the Buckeyes’ 4-3 front several new elements.

Among the tweaks, one already on display in spring camp has been OSU’s addition of a hybrid safety/linebacker. Junior safeties Brendon White and Jahsen Wint have highlighted the players at the position, which is a part of the clean slate Mattison and the defensive staff are wiping in Columbus.

“It feels great,” said Cooper, who compiled 25 tackles (6 1/2 for loss) and 2 1/2 sacks with a fumble recovery and blocked kick across 13 games as a junior in 2018. “I think for everybody it feels great to be back on the football field playing football. We’re really excited with everything being new. It kind of is like a fresh start for our defense and really being able to show the world what we can do.”