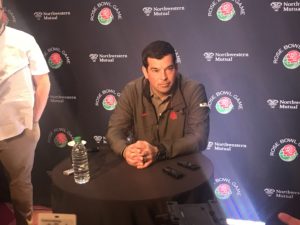 New Years Day has come and gone, and once Ohio State arrives back in Columbus after a Rose Bowl victory, Urban Meyer will clean out his office and make way for Day, who becomes the 25th head coach in program history.

Day, who was ceremoniously handed the coaches whistle from Meyer in the postgame locker room at the Rose Bowl, already has the trust of the players, according to outgoing senior wide receiver Terry McLaurin.

McLaurin reflected on a specific play in the Big Ten title game against Northwestern that encapsulates his comments on Day.

With Ohio State leading 17-7 with just 1:28 to play in the first half, the Buckeye offense was facing a 3rd-and-20 from the 42-yard line. McLaurin said he went to Day and asked to run a “stutter-and-go” route. Day obliged and McLaurin found the end zone on the play.

McLaurin said it is that kind of trust that makes him believe Ohio State won’t miss a beat in the transition from Meyer to Day.

“You’ve got so many great players around here who are four or five star guys across the country and you train them to play in big games,” McLaurin said. “When you have a player-coach relationship like that, I think your team can only go up.”

Day, who takes the reins of the Ohio State program at just 39-years old, said he prioritizes having great relationships with his players and wants to make sure that is a staple of his tenure as the Buckeyes’ head man.

“I don’t know what ‘players coach’ really means. But I know that I take a lot of pride in connecting with the guys and making sure that we connect on a personal level. I think that matters,” he said. “I think they play hard for you when they believe in you and you’re loved by the coach. I want to make sure that is a part of what we do moving forward.”

The Buckeyes’ new head coach added that he wants to maintain the way things get done at Ohio State, while adding his own personal brand of leadership.

“We are going to keep things the same as much as we can, but there are different leadership styles and that will come over time,” he said.