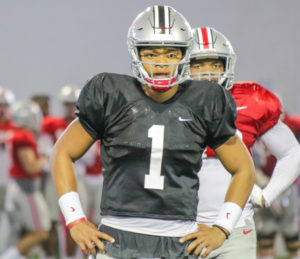 Ohio State has practiced just five times, but head coach Ryan Day has been impressed with the progress his quarterbacks have made this spring.

“[I’m] pretty excited,” Day said. “Both of those guys haven’t started before, so we’re kind of in that mold of finding a new quarterback. In that short period of time, they’ve taken their reps seriously. Not every play is perfect. It’s the third day of pads. We’re still in the install mode, and sometimes they’re running plays for the first or second time ever. Sometimes they’re hearing plays for the first time and they’re seeing the signals.

“I think they’ve shown some poise out there, moved the football, they’ve been throwing the ball. Our defense is a good defense, and so they’re going up against a good defense every day. It’s a good start. Got a long way to go, but [I’m] very, very encouraged.”

Though he was sidelined last spring and limited during the fall as he worked his way back from a significant knee injury he suffered during his senior year at Austin (Texas) Lake Travis, Baldwin took mental reps and learned the playbook under record-setting quarterback Dwayne Haskins. Fields did not have that luxury following his transfer from Georgia in early January, so he’s learning a relatively complicated offense on the fly.

“He’s a pretty quick learner,” Day said of Fields. “In five practices, he’s kind of moving the offense. He’s got a long way to go, but he’s picking it up pretty quickly. We have a lot of offense. We don’t run the same play twice very often, so there are a lot of things being thrown at the quarterbacks. I think he and the other quarterbacks are handling it really well, putting it on the field.

“We’ve just got to keep getting reps and reps and reps. The more reps you get, the better off you are. You can usually tell early on with the quarterbacks if they can pick things up quickly, and Justin’s done a good job of that.”

Though most fans have assumed Fields — a former five-star prospect and, technically, Ohio State’s highest-rated recruit ever — will be the starter, Baldwin has been getting his fair share of repetitions with the first-team offense in practice, as well.

“It’s one of those things [where] we’re going to try to split up the reps the best we can,” Day said. “The guys have to do a good job of taking those opportunities and being successful with them. It’s like anything else, when you get an opportunity, you’ve got to take advantage of those things. We’ll continue to split the reps up and let those guys compete.”