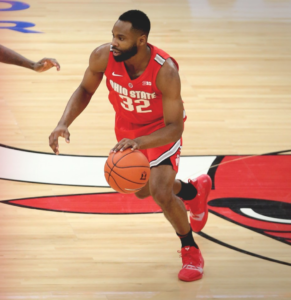 Ohio State had to overcome a lengthy scoring drought, 19 turnovers and a Chris Holtmann technical foul in order to get its second Big Ten win of the year.

It wasn’t always pretty, but the Buckeyes moved to 8-1, 2-0 on the season with a 77-67 over Illinois at the United Center in Chicago on Wednesday night, thanks to multiple contributions from Ohio State’s bench.

Keyshawn Woods scored 12 of his 18 points in the second half to pace the Buckeyes while Musa Jallow added 11 and Duane Washington chipped in nine in the win. Jallow also pulled down nine boards in 24 minutes of action.

Trailing at halftime by four, Ohio State came out of the locker room with a steady dose of Kaleb Wesson. After scoring just five points in 10 minutes in the first half, Wesson scored the first four points of the second half for the Buckeyes and finished with 13 on the night.

The Buckeyes were able to knot the game at 46 after an old-fashioned three-point play from Woods with 15:22 to play in the game. After Illinois re-established a three-point lead at 51-48, Ohio State went on a 6-0 run and never looked back.

Luther Muhammad, who made his return to the court after a one-game hiatus resulting from a shoulder injury, scored five points during Ohio State’s early second half run that put the Buckeyes back in front. Muhammad finished with six points, including a deep three-pointer with 10:49 to play to give Ohio State a 59-53 lead.

Ohio State led by as many as 13 in the second half before Illinois came back to cut its deficit to six on two separate occasions in the last three minutes of play before the Buckeyes salted the win away with free throws.

The first half between the Buckeyes and the Illini was riddled with runs. Trailing 6-5, Ohio State went on a 7-0 spurt that was capped by a corner three-pointer from Jallow with 15:48 to play in the first half. Trailing 12-6, the Illini responded with a 9-1 run to take a 15-13 lead just a few minutes later.

An 11-1 run, bookended by baskets from Ohio State freshman Duane Washington, gave the Buckeyes a 24-16 advantage with 10:33 to play in the opening frame. The Scarlet and Gray took a 30-22 lead into the under-8 media timeout before the game took a nightmarish turn for Holtmann’s team.

Ohio State went scoreless for 5:39 of game time, during which the Illini rattled off a 9-0 run. Holtmann picked up a technical foul during that stretch after arguing that Jaedon LeDee was fouled on a drive to the tin. LeDee, who has played sparingly in bigger games this season, was in for Kaleb Wesson who picked up his second foul with 4:20 in the first 20 minutes and did not return until the start of the second half.

After a pair of LeDee free throws later in the half, Illinois went on a brief 6-0 spurt to take a 37-32 lead before a free throw from Nichols and a hook shot from OSU forward Kyle Young sent the game to halftime with a 38-34 Illinois advantage.

The Buckeyes are set for a 10-day break before returning to action Dec. 15 to take on Bucknell at home. Tip is scheduled for noon and the game will be televised on the Big Ten Network.