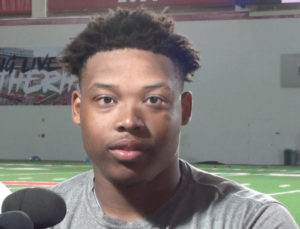 Michael Jordan made another All-America team Tuesday, selected by CBS Sports as Ohio State’s only member on either side of the ball for the publication’s first and second teams.

Jordan’s latest honor comes after he was named an All-American by two other outlets in the past week. Sports Illustrated included Jordan on its first team last Wednesday, while the Associated Press added Jordan and sophomore quarterback Dwayne Haskins to its third team Monday. The 6-7, 312-pound Jordan — who started all 27 games of his first two years at left guard — slid inside to center for the Buckeyes in August during fall training camp and filled the void for former guard-turned-center and fellow All-American Billy Price.

Behind the offensive line’s improvement over the course of the campaign, OSU’s offense has emerged among college football’s best. Paving the way for Ohio State’s multifaceted run game with sophomore J.K. Dobbins and junior Mike Weber, in addition to keeping Heisman Trophy finalist Haskins upright in the pocket, the unit ranks second nationally in total yards (548.8) behind Oklahoma (577.9). The offensive line is tied with Navy for 29th nationally in sacks allowed, yielding just 20 for 100 yards over 13 games (1.54 average).