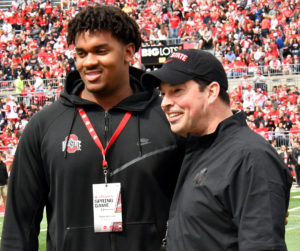 In order to graduate early and enroll in classes next January, Ohio State five-star offensive tackle commit Paris Johnson Jr. will transfer from Cincinnati St. Xavier to Cincinnati Princeton at the end of the school year. The former does not permit students to graduate early under any circumstance, even though it’s a fairly common practice for college-bound athletes.

The news was first reported by WKRC-TV anchor Adam Clements and since confirmed to Buckeye Sports Bulletin by Princeton head coach Mike Daniels.

The 6-7, 295-pound Johnson — who is considered the top-rated offensive tackle and No. 7 prospect overall in the class of 2020 — committed to the Buckeyes in June 2018, but is considering other opportunities following former head coach Urban Meyer’s retirement.

With Johnson’s addition, Princeton now has three of the top four recruits in the state. That includes four-star defensive tackle Darrion Henry and four-star linebacker Jaheim Thomas, both of which hold offers from Ohio State and are among the staff’s top targets.

The Vikings finished 3-7 last season, but will surely have higher expectations this fall.

Johnson, Henry and Thomas have been outspoken about their desire to play together in college and — despite Johnson’s commitment to the Buckeyes — have visited schools such as Alabama, Georgia and LSU together this spring. The trio also visited Ohio State in March, and most anticipate they will ultimately play their college ball together in Columbus.