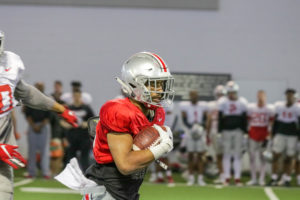 On the west end of the indoor field at the Woody Hayes Athletic Center, Hartline was animated through his presentation as he broke down the traits of an elite receiver.

With film from OSU practices as his visual aid, Hartline dissected individual drills when he stopped to show an example of Jaelen Gill.

“The hips won’t open if the face doesn’t open them,” Hartline said, emphasizing proper technique for receivers getting in and out of breaks.

Hartline pressed play on the clicker in his hand and he remarked as Gill smoothly opened up, swinging his bottom half open and exploding out of a five-yard in route.

“One of the most improved guys this spring,” Hartline said of Gill.

Before the redshirt freshman shined last Saturday in the Buckeyes’ spring game with seven receptions for 95 yards (13.6 average) with a long of 19 on the second-team offense, head coach Ryan Day was honest about Gill’s potential at H-back in 2019.

While there were areas of Gill’s game he needed to polish as his experience caught up with his four-star ranking he sported from Westerville (Ohio) South in the 2018 recruiting class, Day immediately referenced fifth-year senior H-back K.J. Hill as an example for the 6-0, 185-pounder.

“He could have a big role,” Day said March 23 after OSU’s fifth practice of spring camp. “He could be very much like K.J. I think he has a lot of the same skills. Once the ball’s in his hands, he’s really good. He’s pretty crafty. He can catch the ball.

“But again, he’s a young player that has inexperience and there’s a maturity that he’s working through right now. He has made some good strides, so we’ve got to keep building on that, but he’s a young guy.

“There’s a really good room there. If he can kind of grab onto the culture that Parris (Campbell), Terry (McLaurin) and Johnnie (Dixon) left behind and that K.J., Austin (Mack) and Ben (Victor) are really trying to take over for, then I think he’s going to be a really good player.”

Among the veterans in the receivers room, fifth-year senior C.J. Saunders said he sees Gill’s progress piling up.

After the spring game last weekend, Saunders detailed his fellow H-back’s adaptation to the life as an OSU receiver in a pass-heavy offense.

In high school, Gill starred at running back for the nearby Wildcats.

“I talked about it a little bit earlier in the spring,” Saunders said. “I think he’s just really a guy that’s trying to learn the receiver position. Like I said, he played running back in high school until (getting here). So for him, learning the details, he’s an explosive athlete. So how do you get that into becoming a receiver? Because receiver’s such a detailed position.

With a former Ohio State wide receiver in Hartline (2005-08) as his position coach, Gill is in good hands as he continues to learn the ins and outs of H-back.

The Buckeyes’ receivers room remains loaded, particularly at H-back with Hill and Saunders as its veterans.

But with OSU aiming to replace the production of Campbell, who successfully converted from high school running back as he capped his career in 2018 as the program’s single-season receptions leader (90), Gill’s future is bright for 2019 and beyond.

“Great strides — he’s one of the guys who have probably made the biggest jumps,” Hartline said March 27 after the team’s seventh practice of spring camp. “He’s playing fast. He’s in my hip. He wants to learn. He’s doing a great job with his academics, off the field, so there’s still thing he has to clean up — and he knows that, we’ll keep that between us — but in the end, he’s doing a great job on the field and I’m excited for him.”