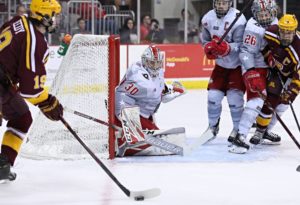 Ohio State still has a chance to wrap up the Big Ten regular-season title at home on Saturday even though the No. 2 Buckeyes were upset 4-3 by Minnesota at Value City Arena on Friday to end a seven-game winning streak.

That’s because two of their closest rivals lost on Friday as well and second-place Michigan was idle. Notre Dame was beaten 2-1 by visiting Wisconsin and Michigan State won 5-3 at home against Penn State.

There are a lot of scenarios to clinch but the simplest is for the Buckeyes to get a three-point win (regulation or the first 5-minute overtime) Saturday vs. the Gophers at VCA (6 p.m., BTN).

Ohio State (41 points) has an 11-point lead over Minnesota and Michigan with five games left. A three-point win gives the Buckeyes 44 points, and a win in the second overtime (which is 3-on-3) or a shootout would put them at 43.

Here are the most points each of OSU’s pursuers can accumulate, keeping in mind that with varying number of games left to play the actual standings are of less importance:

That’s it. Those are the only teams that can prevent the Buckeyes from winning their first conference regular season title since claiming the Central Collegiate Hockey Association in 1972.

Minnesota led 1-0 after one period and never trailed, holding 2-1 and 3-2 leads before Scott Reedy scored on the power play with 9:16 left in regulation for a 4-2 lead.

The Buckeyes pulled senior goalie Sean Romeo for an extra attacker with 4:12 left and got a goal from freshman Quinn Preston with 3:35 to go, but another penalty to the Buckeyes with 2:52 left killed off most of the remainder of the game and Minnesota held on for the upset.

“We know we had to go out and play desperate hockey (in the third period),” OSU junior Ronnie Hein said. “We’ve got one period to put 20 minutes together and see how it ends up. We have the group of guys to do it, but it’s got to start in the first period.”

The Gophers (12-14-4, 9-9-3-0 Big Ten) had lost four of five but clamped down hard on the Buckeyes, who are having trouble getting shots on goal, much less scoring.

Ohio State is continuing to play without injured forwards Tanner Laczynski and the strain is beginning to show.

Minnesota led 1-0 after one sluggish period on a goal by defenseman Jack Sadek from the left point at 16:44 on the Gophers’ third shot.

OSU did not generate any dangerous scoring chances as space and time was taken away by the aggressive Gophers defending, especially in the neutral zone to quiet the crowd of 5,400.

Ohio State, which had seven shots in the first period, went more than 11 minutes without a shot in the second period. Shortly after that, Minnesota went up 2-0 at 11:56 when Nathan Burke converted a centering pass by Blake McLaughlin.

The Buckeyes second and final shot of the period drew them to within 2-1 with 15.5 seconds left.

Senior Dakota Joshua won the faceoff. Junior Carson Meyer got the puck to junior Gordi Myer, who sent a shot toward the net. It went off a Gophers player and Wiitala, a Minnesota native. Hammered it in for his sixth goal.

“We probably played our worst first two periods of the year,” Ohio State coach Steve Rohlik said. “It’s disappointing from the standpoint we come out against a really good hockey team and played the way we did for two periods.”

The low shot total continued a disturbing trend. The Buckeyes had seven shots on goal in the first two periods at Wisconsin on Feb. 8. The next night, they were protecting a 3-0 lead through two periods and had just one shot in the third – an empty-net, shorthanded score by senior Mason Jobst with one second left in the 4-1 win.

The Buckeyes came out with more jump in third and had four shots in the first six minutes but gave up a goal at 6:10 to an unlikely source.

Minnesota defenseman Ryan Zuhlsdorf pounced on a turnover and scored his first goal in 100 games. Yes, 100. The senior has three goals in 102 career games.

The Buckeyes made it 3-2 at 8:41 when junior Sam McCormick scored his first goal since Feb. 10, 2018, when he scored at the left post, taking a shot of the end boards by Hein and stuffing it in. But senior Dakota Joshua took a hooking penalty for the Buckeyes and later it was senior Brendon Kearney that gave Minnesota its final power play with under three minutes to play.

“The third period we played desperate then we shot ourselves in the foot with penalties again,” Rohlik said.

Romeo made 19 saves. Eric Schierhorn made 21 for the Gophers.