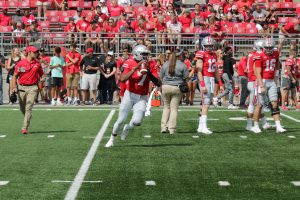 On a gray afternoon along the banks of the flowing Olentangy River, the rain-sodden No. 4 Ohio State Buckeyes once again rode the arm of sophomore quarterback Dwayne Haskins Jr. to a 52-3 win over Rutgers in the Big Ten opener for both teams at Ohio Stadium on Saturday.

The sophomore completed 20 of 23 passes for four touchdowns among his 233 yards in a little more than two quarters of work for the Buckeyes (2-0, 1-0). He had five TDs in his first career start Sept. 1 vs. Oregon State.

Senior receiver Johnnie Dixon caught TD passes of 38 and 44 yards and had 89 yards total on five catches. Sophomore back J.K. Dobbins rushed for a TD and had 73 yards on the ground before a before a soggy and unusually small crowd of 93,057 at Ohio Stadium. The weather and the lack of a competitive opponent played into a rare attendance below six figures.

If not for a Rutgers TD with 13 seconds left in the 2015 game, a 49-7 OSU victory, the Buckeyes would have scored 205 consecutive points vs. Rutgers over the past three games.

As it were, the streak was stopped at 156 when Justin Davidovicz kicked a 41-yard field goal with 8:02 left in the third quarter to make it 42-3.

Rutgers true freshman quarterback Artur Sitkowski had a rough outing before apparently being injured on the final play of the first half when he was sacked by junior defensive end Nick Bosa.

He left the game for a play after being leveled at the Rutgers’ sideline on a late hit in the fourth quarter. He returned and passed seven yards to Demario McCall, then ran 47 yards for the final score of the game. Martell finished as the game’s leading rusher with 95 yards on eight attempts.

The Buckeyes scored on their first possession, taking over at the OSU 33 after Demario McCall recovered his own muffed punt return.

Three of the five plays on the drive were completions: 12 yards to Parris Campbell, eight to Austin Mack and the 38-yard scoring strike down the middle to Johnnie Dixon in the end zone for a 7-0 lead with 10:57 left in the first.

Dixon, a senior, had TD receptions of 70 and 39 yards vs. the Scarlet Knights in the first half last season during the 56-0 win.

Haskins threw his second TD to make it 14-0 at the 2:25 mark of the quarter. Weber started the series at midfield with a 15-yard slashing run. He went six yards on the next play, but a 10-yard Luke Farrell 10-yard gain on third-and 4 from the 29 was needed to keep the drive alive.

Then, on third-and-7 from the 16, Haskins found Campbell cutting left to right at the goal line for the score.

After three straight incomplete passes, the Buckeyes took over on the OSU 29 and went on a methodical 13-play, 71-yard march that consumed 4:26 and resulted in Haskins’ third TD toss, this time of nine yards to Farrell, the sophomore tight end who scored for the first time as a Buckeye. Dobbins touched the ball eight times (seven runs, one pass) for 49 yards on the drive.

Martell took the snaps on the next series and it was quickly 28-0. C.J. Saunders’ 20-yard punt return to the Rutgers 45 set the scene. But a holding penalty on left guard Malcolm Pridgeon eventually left the Buckeyes with 16 yards to go on third down from the OSU 49.

Martell went deep down the right sideline and connected with Terry McLaurin at the 4 and he went in for Martell’s first career TD pass with 11:05 remaining in the first half.

The domination continued when Haskins led a 76-yard drive the appeared to stall when a 43-yard catch-and-run by Dobbins was negated by a Pridgeon hold.

An undeterred Dobbins rushed for 21 yards to the 50 and added 11 more on a catch. Haskins hit Campbell for 16 and the Buckeyes were on their way to 35-0 advantage when a pass interference on Rutgers set the ball at the 2. Dobbins ran in from there with 5:00 to go.

The half fittingly ended with Bosa’s 10-yard sack of Sitkowski at the Rutgers 23.

OSU took the second half kickoff and Haskins turned a second-and-16 into a 44-yard strike to a speeding Dixon to make it 42-0 just 2:11 into the third quarter.

After Rutgers scored, aided by a roughing the passer infraction on Malik Harrison, Sean Nuernberger kicked a 21-yard field goal to make it 45-3.

Offensive coordinator Ryan Day completed his second of three games as acting head coach for Urban Myer. Day will also coach the game Sept. 15 vs. No. 15 TCU at AT&T Stadium in Arlington, Texas, as Meyer finishes his three-game suspension for how he handled former wide receivers coach Zach Smith, who has allegations of domestic violence and other indiscretions.

Meyer was allowed to coach practices beginning Sept. 3 but could have no contact with the program beginning 24 hours before the game.